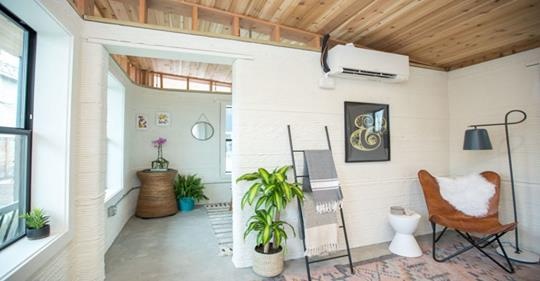 AUSTIN, Texas—A Texas startup says it will be able to use a 3-D printer to churn out a concrete house within days by year-end, a technology that has the potential to help solve housing shortages but faces regulatory and technical hurdles.

The firm says the printer, unveiled Monday, can produce bungalows of up to 2,000 square feet, nearly as large as the typical 2,400-square-foot American home. Previous efforts in the U.S. and Europe have mainly resulted in printing simple shelters, and the technology has been largely one of promise rather than reality.

Austin-based development company Cielo Property Group is purchasing Icon’s Vulcan II printer and aims to use it to produce affordable housing in that city later this year.

About a year ago, Icon built a 350-square-foot home in an Austin backyard using the new technology after receiving city approval. That could help smooth the way for Cielo’s projects.

Still, home builders are likely to face skepticism about the look of the new houses, which are poured one layer at a time, producing walls that resemble the folds of a shar pei dog.

“We are by nature a conservative industry,” said Scott Norman, executive director of the Texas Association of Builders, who isn’t involved in 3-D printing.

The technology faces other practical hurdles. Scaling up the production and shipment of expensive and heavy machinery is formidable. Building homes in windy, rainy, hot or cold conditions presents another test. “You’re not in a sterile lab environment,” Mr. Norman said.

Icon is also teaming up with the nonprofit New Story to print at least 50 homes in Latin America that are slated to be finished this year.

The new 3-D printer is operated by a tablet and requires only a few people to run and supervise it. The 3,800-pound machine squeezes out a stream of concrete as though it is icing a cake.

The machine replaces workers who frame a home and install sheet rock, insulation and exterior finishes. It also produces less waste than a traditional construction site, where some experts estimate a third of materials end up in the trash.

Icon said it costs about $20,000 and takes several days to 3-D print a 2,000-square-foot house. After factoring in the cost of land and other construction such as plumbing and finishes, it works out to a reduction of about 30% in total costs, Mr. Ballard said.

In Austin, where the average home is roughly $400,000, Icon said it could make a home $120,000 cheaper—if builders pass all the savings on to consumers.

A number of companies around the world are scaling up efforts to build homes and other structures, such as hospital rooms and jail cells, using 3-D printing.

Bay Area-based Mighty Buildings has raised $10 million to print homes, though the company has yet to unveil any products.

Icon was founded two years ago by Mr. Ballard, who owned an eco-friendly home-improvement company, along with partners including a mechanical engineer. The company has raised $9 million of seed funding and says this will be its first effort to generate significant revenue. A year ago, its printer could only build a 500-square-foot structure that was more suitable for a temporary shelter.

As fantastical as it seems, a 3-D-printed home could address real problems facing the industry. Construction costs have skyrocketed due to shortages of workers and rising material prices. About 1.2 million homes have been started annually in the U.S. over the past several years, about 250,000 fewer than the historic norm. Dozens of startups have also poured hundreds of millions of dollars into technology that could make the industry more efficient. None has yet made a real dent in the problem.

“People will look back on this as something that was a game changer,” said Ben Carson, the Department of Housing and Urban Development secretary.